When I heard of Himala: Isang Musikal last year, I wondered if I had ever seen the film it was based on. A part of me thought I had watched it in one of my Filipino classes, but I wasn’t sure. After last week’s press conference, my memory is still as hazy as ever. Everyone from the production and cast to the press raved about how unforgettable the piece is, making me think that, maybe, I hadn’t seen it at all. If I had, I would remember. Right?

That seems like I’m blindly subscribing to other people’s claims though—ironically, a theme this story plays upon. If I want to find out for sure, I have to see it for myself.

Luckily, I won’t have to wait long. The Sandbox Collective and 9 Works Theatrical are bringing Himala back to the stage this February, and from the sneak peek that I got, it’s set to be one emotional rollercoaster of a musical. Read on to learn more about this production, and enjoy a preview of its music!

Penned by Ricky Lee, Himala tells the story of the people of Cupang, an isolated barrio in the thick of drought. They find hope in Elsa, who claims to have the gift of healing after having a vision of the Blessed Virgin Mary. As news of Elsa spread, curious visitors pile in, and the town descends into chaos in their struggle to survive.

Lee derived the name Cupang from ‘coping,’ saying, “This is a community of people who are suffering and coping.” He shared that his writing was initially rejected because it wasn’t a love story, but he feels fulfilled by the success of Himala and its many reincarnations.

It was musical director Vince DeJesus who took on the task of adapting Himala for the stage in 2003. He first saw the film when he was 15 and believes that it becomes more relevant as you grow old. “It has many layers—faith, faithlessness, fanaticism, how a good person can go wrong in an effort to be loved end up being broken,” he said. 2018 marks the 15th year since DeJesus finished writing the libretto with Lee, and he’s excited to celebrate it with a new cast.

2. Ed Lacson, Jr. landed the role of director of Himala at a drinking session.

Lacson shared that he was drinking with DeJesus and some friends when they offered the musical for him to direct. He accepted but thought that was just the alcohol talking. To his surprise, he got a call from Vince two days later asking for a meeting. “Then it dawned on me that they were really serious when they asked me,” Lacson said.

It was in his college years that he first saw Himala, and the images were burned in his mind.  “When I was starting out, the musical made an impact, and it was one of those things that drives you in your chosen path,” Lacson said. “I feel like there’s a new generation like me who would benefit from seeing this particular material. That drinking session was almost 2 years ago. And it took us almost a year and a half before we found the right people to produce it.” 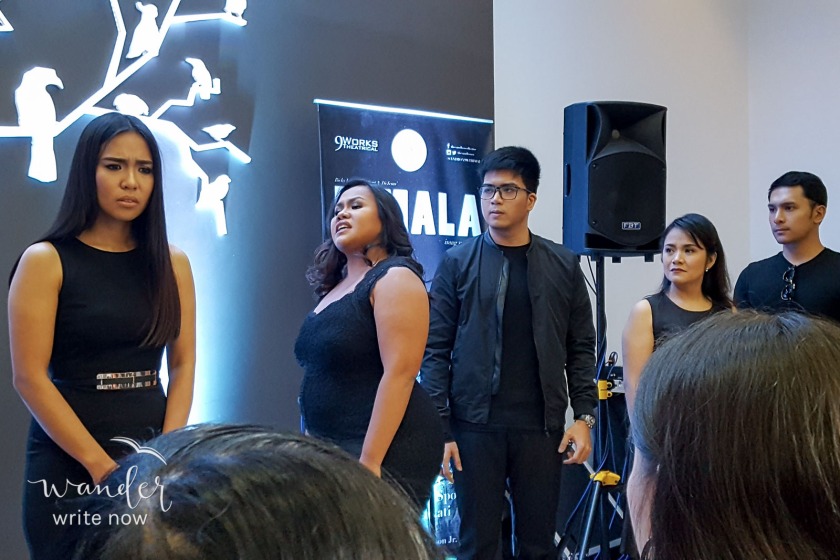 3. Himala marks the first collaboration between The Sandbox Collective and 9 Works Theatrical.

Although The Sandbox Collective and 9 Works Theatrical are family, this is the first time they officially partnered for a production. Anna Santamaria, the Operations Director of The Sandbox Collective, said they had been looking for an original Filipino musical for a while. They learned Lacson was searching for someone to mount Himala, which was perfect. “It’s a powerful play with haunting and beautiful music,” Santamaria said.

Santi Santamaria, the Executive Producer of 9 Works Theatrical, shared that it was the best time for them to help The Sandbox Collective, especially with such an iconic musical. They had worked with Lacson before and believed that no one would be able to direct Himala better than him. But Santamaria had a condition for Lacson—he had to create the set for last year’s run of A Christmas Carol. And so he did.

Photo courtesy of The Sandbox Collective

Awit Awardee Aicelle Santos leads the cast as Elsa, with Kakki Teodoro joining her as the former prostitute Nimia, Neomi Gonzales as Elsa’s childhood friend Chayong, Sandino Martin as Chayong’s former lover Pilo, David Ezra as Orly the filmmaker, Bituin Escalante as Elsa’s mother, Floyd Tena as the priest of the town, and Omar Uddin as a child.

When Aicelle learned she had landed the role of Elsa, she was happy and excited, but only for about three minutes. Then, the enormity of her role sank in, and she felt scared. She confessed that she is still in the process of finding Elsa—a challenge that she is up for. Luckily, she has the entire town of Cupang rooting for her.

5. This stripped-down production of Himala is said to be an immersive experience.

Instead of trying to mount a bigger and more spectacular production, Lacson went the opposite route. “I wanted to go simpler—to distill it and to really simplify and find the strength in the stories and characters, in the ironies of all those little scenes where you see them as people making decisions to survive and cope [with] the everyday happenings,” he said.

He described his style as minimalist, including only the elements needed to tell the story and push it forward. Unlike previous stagings, he opted not to put choreography, relying on the strength of his cast in building their individual characters. He will, however, follow the tradition of limiting accompaniment to a single piano. There will be no microphones, just the piano and human voice. He believes this will make it easier for the audience to connect emotionally to the characters and locate them onstage.

As for the immersive element? Audience, prepare to be part of the set. Because of the limited space, Lacson decided to push the scenic elements to the sides, effectively putting the set on the audience. “It’s more of a feeling of coming into the town of Cupang,” he explained.

“How did an entire town—an entire country—end up in that situation because of one girl’s statement, whether it’s true or not? It’s very common nowadays,” said Lacson. Despite the role religion plays in the story, he doesn’t think it’s the central theme. “It was just a vehicle of telling this story. For us to see how Filipinos decide,” he explained. “It’s so Filipino sensitivity—the decision-making couldn’t happen anywhere else. The situations, everything has to happen in the Philippines.”

This restaging began as a passion project for Lacson, DeJesus, and their partners, but they knew they wanted to do it for a new generation. Lacson believes that anyone’s first experience of Himala is and will always be the best, so this is meant especially for new viewers. He said, “Hopefully, in removing the artifices, the spectacles, we go down to the core of the film, the core of the musical, which is people trying to cope and survive. Hopefully, that’s powerful enough for you to get in the story and be invested in it. And hopefully, you’ll leave the theater feeling something. Not to be entertained or be taken away from the current happening but to really experience something and feel something.”

Ricky Lee and Vincent DeJesus’ Himala: Isang Musikal will be showing at the Power MAC Center Spotlight, Circuit Makati from February 10 to March 4, 2018. For inquiries and tickets, contact 0917.5545560, 586.7105, sab@thesandboxcollective.com, or Ticketworld at 891.9999. For a list of show buyers and contact details, please visit The Sandbox Collective or 9 Works Theatrical online.

See you at the theater! 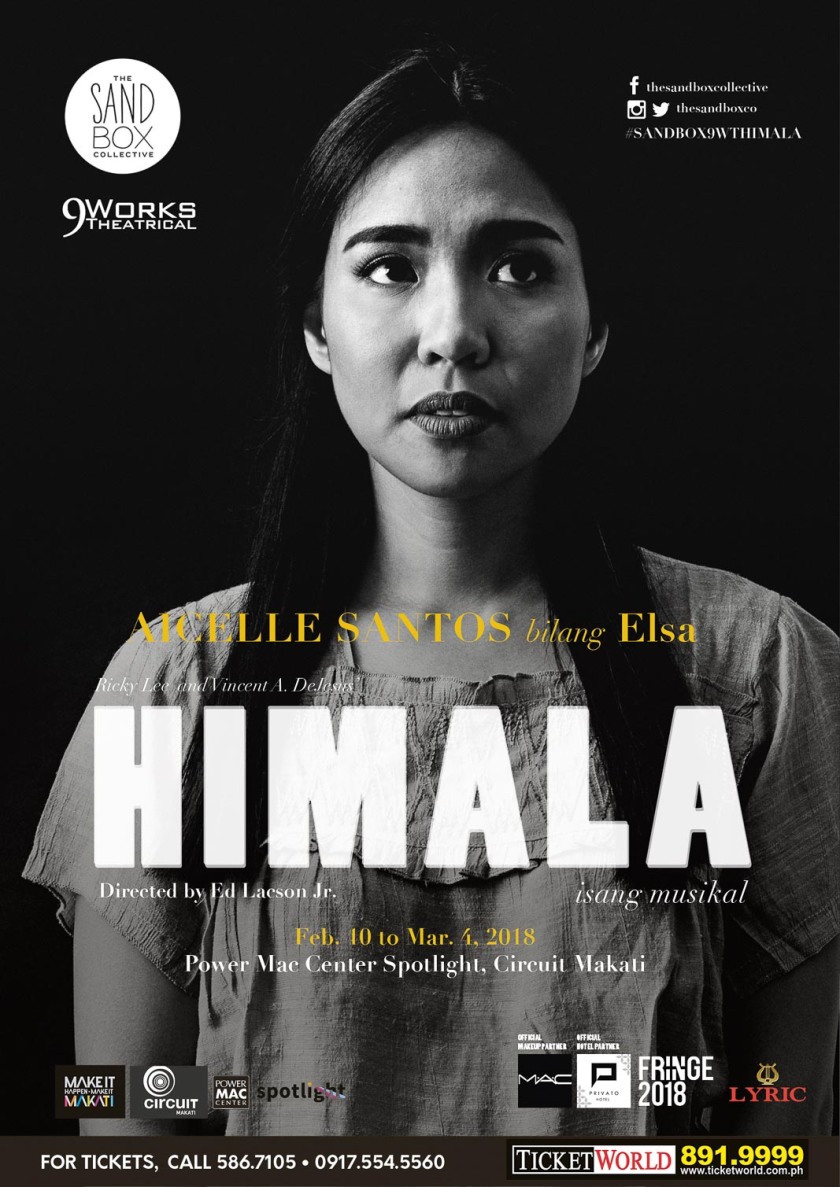 Himala: Isang Musikal is a production of The Sandbox Collective and 9 Works Theatrical, together with MAC Cosmetics as the official makeup partner, Lyric as official music partner and Privato Hotel as official hotel partner. Special thanks to Ayala Land and Fringe Manila.