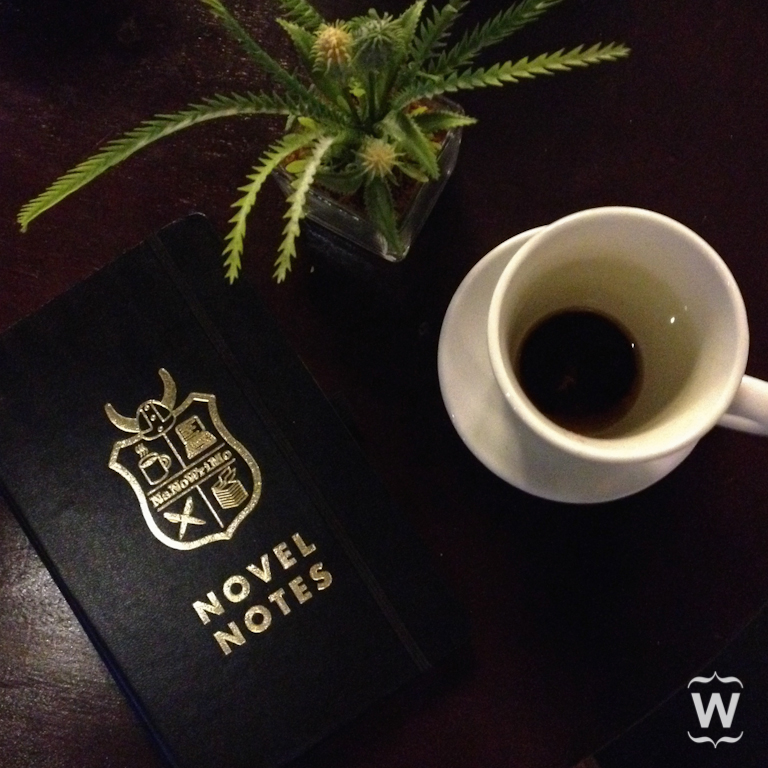 My raffle prize at the Thank God it’s Over party—an official NaNo journal. Isn’t it gorgeous?

Before I get caught up in the December festivities, let me take this moment to celebrate the month that was.

To most, it’s that time of the year to play catch-up—with the work and personal goals they haven’t quite achieved yet, with the pre-Christmas-rush shopping, with their friends and family before everyone gets busy with the holidays.

To aspiring authors, it means only one thing: NaNoWriMo. National Novel Writing Month, aka the month of uninhibited word vomiting, of ignoring the backspace key, of backing up documents to the point of paranoia, and of shamelessly indulging in excessive amounts of coffee, chocolate, and junk food (that is, unless you’ve got GERD like I do).

This was my third time to join NaNo, my third time to win it, and my third time to not finish my novel in thirty days. The first time, I came in without a plot, simply armed with an idea that I thought was totally brilliant. I wrote the required 1,667 words a day when I could and made up for what I skipped when inspiration struck. The second time, I semi-plotted the same novel, got myself that purple bar, and left my main character hanging.

“It is not important that you stay the same writer you are now, or that you have a definite routine or pattern… What is important, far more than the definitions we cling to, is that we finish the stories that we are burning to tell.” – Veronica Roth

This time, I swore it would be different. I swore I’d not only keep up my winning streak but, more importantly, finish my novel—a new one, too—if not by the end of November, then at least before 2015 rolls in. I read writing books, researched plot guides, filled out my beat sheet and character templates, wrote chapter summaries, and even created a photo database. To challenge myself further, I decided to try Reverse NaNo, where you write the bulk of your novel in the first two weeks.

Then, it was time. My local region, called the Pinoywrimos, had a huge kickoff party to get us all pumped up to write. Despite getting sick with an awful stomach bug, I had a good first week. I struggled during the second week and flatlined after hitting the halfway mark. Then during the third week, I realized I had to quit reading all those new books on my Kindle if I wanted my own story to actually see the light of day. So I soldiered on, relying on my detailed Excel master file to get me through my writing slump.

I realized that, as the writer of my story, I’m as much the villain as I am the hero. My biggest problem isn’t not being able to write—after all, I typed more than three thousand words on my iPhone while I was sick in bed one night. It isn’t even not knowing what to write, since I have everything roughly plotted out.

It’s me not wanting to write, or at least not wanting it enough to beat down my laziness, kick distractions in the butt, and fight through my writer’s block.

I am, first and foremost, a reader, and I’ve never admired authors more than I do now, having realized just how much discipline and perseverance goes into this craft that’s sadly underappreciated. And I realized what an honor it would be to join their ranks someday.

If I had it my way, that someday would be soon.

So the writing goes on, even after 50K. Just as my heroine battles to win her man, I’ll battle to achieve my dream. I’ll slay my inner villain to get my story—my stories—told. That, I believe, is the best win of all.