In honor of it being midway through NaNoWriMo, I thought it was the perfect time to write about one of my favorite parts of my freelancing gig—interviewing published authors. It’s been a long-time dream of mine to publish my own novel, and nothing inspires me quite like talking to people who have done it, and done it well. More than celebrities, it’s authors who bring out the fangirl in me. It’s always such a pleasure to meet them and realize that they aren’t just extremely smart and well-spoken, they’re also down-to-earth and, well, awesome. Like I said, total fangirl.

Thanks to National Book Store and Hitlist.ph, I’ve been able to meet several authors whom I never would’ve dreamed of being in the same room with, let along talking to one-on-one. I’ve picked up some great insights from them, and I thought I’d share them with you all. I hope you find these interesting and useful too, and if you’d like, you can click on the links to each of my articles to check out the full interviews. Enjoy!

On having a critique group:

We helped each other with our stories, and we encouraged each other when we were submitting them to publishers. We’re all published now, which is kind of a testament to sticking together and really not giving up. It took several of us years—it took me five years to get published, but I think that it’s so important for writers to surround themselves with other people who are going through the same things, so that you can cheer each other on and hug each other when the rejections come in.

Read more about my interview with Becca here.

Veronica Rossi, Under the Never Sky trilogy and Boomerang

On her “Still Blue”: 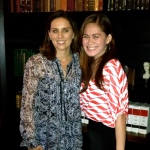 It’s to just be fearless and have the guts to do the things that I wanna do. ‘Cause i think that it’s really easy—especially now [that] I have a trilogy under my belt, and I generally know what readers like, and I know what publishers like, because they tell me—and it’s super tempting to be just like, “Okay, I know how to do this again. I’m just going to replicate this formula.” Unfortunately though, that isn’t always exactly the thing that I need to do. I need to challenge myself. I need to grow. I need to follow my heart artistically. And so really, my Still Blue is carving a path forward in my career where I stay true to that, stay true to myself, and then hopefully all the other things are still there for me. But I don’t wanna compromise. Because I feel like life’s too short and the time that it takes to write a book is a long time. I might as well spend two years writing something that I love if I can—and so far, i’ve been able to—than to do that writing something that my heart’s not really in.

Read more about my interview with Veronica here.

Anna, Lola, and Isla—all three of my books had a NaNoWriMo draft. But it came about really kind of a backwards way. I’d always kinda pooh-poohed NaNoWriMoers, like, “Oh, how could anyone write a book in a month?” I was missing the point. I was thinking, “How can anyone write a good book?” but it’s about finishing a book. I clearly had a problem finishing something. I never finished anything.

It saved me really. It was the confidence-booster that I needed, because when I started it, my confidence was so low. I’d been working on this terrible thing for so long. And so even though that first draft—it was bad, it was so bad, and it was nothing like the final book at all… But that moment when I hit 50 thousand words and hit The End, it was huge. It felt incredible. And it really gave me that confidence, like, oh I can do this. That gave me the boost to actually finish the book, and find an agent, and get published. I’m such an advocate for them. I think they’re amazing.

Read more about my interview with Stephanie here.

I feel like novels, they’re like this—there was this Japanese video game called I think Katamari [Damacy], where you’re this little atom floating around, and you start attaching other things to you. It’s like you’re sticky, and you start rolling, and you get bigger and bigger ’til you’re attaching objects, then you’re attaching buildings to yourself, and then you’re attaching continents, mountains, and then planets and then galaxies. So you become this huge thing where all this stuff is sticking to you. Novels are like that. It starts as a small idea, and other ideas start sticking to it. And you roll with those, and more things start sticking, and the idea gets bigger and bigger as more things stick to it.

Read more about my interview with Alex here.

Read a lot, because the more you read, the more you develop an instinct for what makes a good story. I watch a lot of TV, and I feel like it’s really helpful in writing because the pacing on TV is so fast, and the dialogue crackles. I think the biggest struggle when you’re starting out especially is saying to yourself that it’s okay to fail and that it’s okay to write things that aren’t good. Most beginning writers get really hung up on the first draft, trying to make it perfect. That’s something that I’ve had to let go of too. I always joke that the first draft is a celebration of all that can go wrong on a page. It is supposed to be a mess. Sometimes when I’m stuck, what I actually do is I write ahead in almost stalled dialogue, because when I do that, it moves the story without worrying about making everything right or pretty… It’s a long process, but everything leads to the next thing. Everything happens for a reason. That’s my writing credo.

Read more about my interview with Jennifer here.

On her favorite thing about writing:

The discovery. This is what I love the most. It’s so exciting—you think you know the overall plot, you think you know a lot of things, but then all of a sudden, something will happen, and you’ll go, “Yeah, that’s happening because of this, and I never planned this, but look at the beautiful symmetry here.” You gave this character this background, and now you see that it’s paying off here. Those things delight me, ‘cause it means organically, somehow this subconscious mind knew what it was doing. I’m sure you’ve heard this from other authors that sometimes, we look back at our work and go, “Who wrote that?” It’s almost like someone else is doing it.

My editor conducted the interview with Lissa, but I wrote the article. You can read it here.

On wanting to become a writer:

I always wrote, but I never had any confidence in my ability to make a living as a writer. You tell your friends you want to be a writer for a living, [and] nobody goes, “That is a great career choice, I’m sure you would not wind up living in a basement at any given time.” People were always like, “You’ve got to be careful.” And I was careful. I did everything else first. I tried to be everything else except do the thing I most wanted to do. Then somehow, that ended up being the thing that worked out, and I’m still to this day going like, “Really? It worked that way?” It’s really amazing.

Read more about my interview with Claudia here.

I have a lot of people who ask me for advice on how to get published and how to start, and I’m the worst possible person to ask, ’cause I did it the opposite way that most people do. I always tell them that’s a chance to do that. Always put yourself out there and hope someone finds you. But I actually think the traditional way is still the best. The most direct. Now that I meet a lot of authors and that’s the way they did it, it’s not impossible. They started just like everybody else. They didn’t know what they were doing, and their first few queries were terrible. I actually did start doing it that way. I sent out my really crappy historical drama book that I finished while I was doing Allison Hewitt, and Allison Hewitt hadn’t gotten noticed yet. So I sent it to the agency where my now-agent works, but I sent it to her colleague and never heard back. It just vanished. And then Kate gets in touch with me months down the line… So I did try to do it. I did get a few agents that wrote back [and said] it’s not quite ready. But there are just two different processes to do it.

Read more about my interview with Madeleine here. (As a side note, I chatted with her post-interview, and she told me how she’d fainted while getting her first tattoo, more from the anticipation of it than the actual pain. Yet she’s planning to get another one—on her head! How kick-ass is she?)