Back when our trip to Korea was still on the drawing board, we’d asked Sue what place/s she’d recommend for cultural/traditional value. Straight out, she said, “Gyeongju”.

I don’t know about you, but I myself had never heard of that place before then. And so, I turned to the modern encyclopedia of Wikipedia and the master catchall of knowledge–that little thing we call Google.

Gyeongju was the ancient capital of Silla, one of the Three Kingdoms of Korea. It is located in the province of North Gyeongsang in South Korea, a bit over two hours from Seoul when traveling by rail. Notable spots include the Seokguram grotto and the Bulguksa temple, both of which have been designated as UNESCO World Heritage sites. Aside from these though, Gyeongju is liberally peppered with historical and cultural treasures that bring in both local and foreign visitors alike.

On one bright Saturday morning, we joined a few handful of tourists in the two hour journey to that ancient capital. We’d purchased tickets for the 7 AM KTX train in advance, dooming us to a very early wake up call. What with getting lost in the Seoul Station complex and all, we barely made it in time. Picture my siblings and I running down several flights of stairs, only to run back up them a few minutes later…with our suitcases, I might add! That drove home the advantages of going the backpack way.

Thankfully, we were able to find our way to the platform and met up with our cousin with a couple of minutes to spare. During the ride, I slept a bit, then alternated between reading on my Kindle and eavesdropping on the conversation of this group of frisbee players seated across the aisle from us. The view outside quickly shifted from the buildings of the city to the fields of the country. Sue had told us that we might have a better chance of seeing cherry blossoms in Gyeongju, so I kept an eager eye out for that. Unfortunately, while the trees and plans were somewhat greener than in Seoul, it was nowhere close to the photos I’d seen of the countryside alive in vivid color. 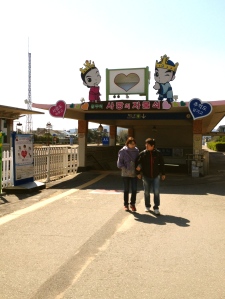 The first thing we did upon arrival was to head on out to the Tourist Information Center to ask for directions to our hotel and to get city maps. It was there that we first hit that pesky roadblock that would pop up more than a few times over two days: the language barrier. There was this huge confusion about our hotel name–the ladies at the center couldn’t seem to look it up, and the three taxi drivers refused to give us a ride because they couldn’t understand us. It turned out to be a case of false advertising–our hotel was reflected in the booking sites as “Sono Hotel”, but was actually “Sono Motel” in the official records. Funny how just one letter marks a huge world of difference.

Since we couldn’t grab a cab, we decided to walk it all the way downtown. The ladies at the center estimated it at fifteen minutes; we probably did it in twice that time as we were lugging our suitcases with us. When we got there, we found out that it really was a motel, tucked away near the Jungang Market.

I have to say, it was my first time staying in a motel, or even entering one. The entrance to the garage was partially screened with some cloth banners so that you wouldn’t see the license plates of the parked cars. Inside the slightly-bigger-than-a-phone-booth lobby, there was this vending machine that you could use to purchase rooms, if, you know, you don’t want to deal with the concierge.

We were lucky enough to be able to check in though we arrived early. The rooms were actually decent-sized and were clean–looked like the motel was relatively new. I loved the heated wood floors (something that’s common in traditional Korean houses) and the wallpaper-clad wall with its floral motif. What I didn’t like was the glass separating the bathroom from the main area…especially since I was bunking with my brother. Can you say awkward? 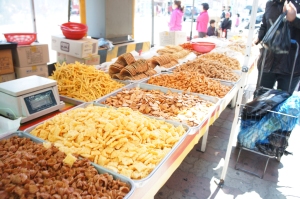 Food sold in the market near our motel

Anyway, after freshening up a bit, we decided to walk to the Ssambap Restaurant Complex near the Wolseong Park. I was taking in the sights, and it seemed to me that Gyeongju’s really more of an old town. Unlike Seoul, high-rise buildings were few in number and widely scattered. For some reason, we didn’t see a lot of people while we were walking, apart from the occasional group of Caucasian tourists on bikes and the locals bustling about in small shops/restaurants. Then we discovered that while our destination looked to be somewhat near our point of origin based on the map, that wasn’t the case in real life…or at least not when you’re traveling on foot.

Needless to say, tempers were high and feet were sore when we finally arrived in the supposed whereabouts of the Ssambap Complex. We got even more annoyed when the only ssambap place we saw was closed for some private function. We ended up at this small place that specialized in tofu, and I satisfied myself with Gyeongju ppang, a local bread that’s made of red bean paste sandwiched in thin barley pancakes. After that, we had coffee and sausages (ahh, meat!!!) at the nearby Mario del Monaco cafe. 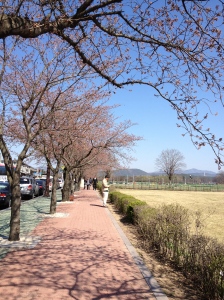 From there, we just crossed the street to the Wolseong Park. The pedestrian walk is lined with cherry blossom trees in the early stages of blooming. That would look amazing when spring finally rolls in. Inside the park, there was an area filled with white tents, where people seemed to be streaming in. We followed them out of curiosity, and found this array of women conducting tea ceremonies. Anyone could just sit in front of one of the women, and they would make tea for you. Some of the setups were as simple as just a tea set and a gallon of water, while others were more elaborate, with mini-trays of chocolates and fruits and a nice little flower vase to pretty it up.

ere was a stage right in the middle, with an emcee making announcements that we couldn’t understand, as they were all said in Korean. In the many tents surrounding the main area were vendors selling local delicacies and crafts. There was even a pottery booth, where the artist was helping a young girl make her own pottery.

My brother and my cousin both tried the tea, then we went further inside the park to the site of the Cheomseongdae Astronomical Observatory. The observatory is one of the images that’ll first pop up when you Google “Gyeongju”, and I must admit I was surprised that it was actually quite small. When you say observatory, you usually think TALL, right? So that you’ll be able to see the sky at a somewhat closer and unimpeded view. Then again, it was built in 634, long before skyscrapers and high-rises came into existence.

Translated as star-gazing tower/platform in Korean, Cheomseongdae is known as the oldest existing observatory in East Asia.  It’s constructed of 362 stones–to signify the days in a lunar year–piled up in 27 levels following a cylindrical shape. Visitors have to pay 500 won (for adults) to get closer to it, but since you can’t enter the actual structure anyway, we decided to just admire it at a distance. 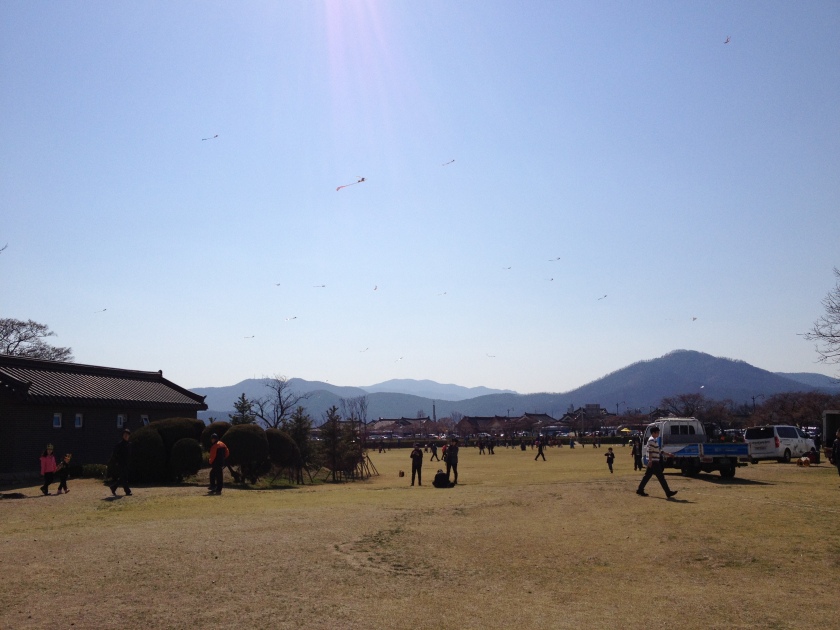 Wolseong Park seemed to be the place where families gather during weekends. Many of them were flying kites in the sprawling grounds, or just leisurely walking around with drinks and food in hand. There are also supposed to be horse-drawn carriage tours available, but we weren’t able to chance upon any.

From the park, you just have to walk down the road to get to the Daereungwon Tomb Complex. Admission is at 1,500 won for adults, and it’s pretty much worth it especially considering that the complex is home to twenty-three tombs of Sillan kings and noblemen. In this case, their tombs are in the form of large mounds of earth referred to as tumuli, hence the moniker “Tumuli Park”. Apparently, you can enter one of the more notable tombs known as Cheonmachong, where you’ll see some thousand relics of the king. I have no idea why we didn’t think to go inside. The grounds of the complex was really nice, with calm ponds and trees just about to come to life. 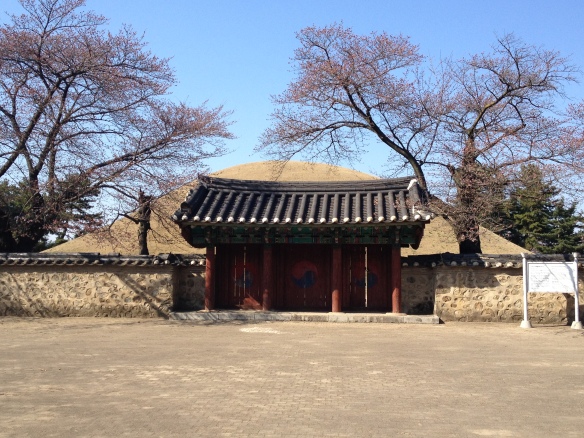 One of the twenty-three royal tombs

After we’d had our fill of the place, we decided to catch a bus to the Gyeongju Bus Terminal so we could schedule a tour for the following day. We figured that it would be better to have a guide to explain the history and cultural relevance of the different sites. Unfortunately, it turned out that all their tours were in Korean. That was really surprising, ’cause you’d think they would cater to foreigners as well, or even primarily. Anyway, we signed up for the tour, even just so that we wouldn’t have any problems going around.

We also asked the woman at the Tourist Information Center (yes, back there again!) where we could find a good ssambap place. She directed us to the Bomun Lake Resort, which was a bus ride away. Thankfully, we were able to find the dining complex without any problems. Starving for a real meal, we hunkered over to the Korean Restaurant–yes, that’s the name. Or the English part of it, at least–and finally got to eat ssambap!

Literally translated as wrapped rice, ssambap is a rice dish served with a variety of vegetable leaves, meats and your traditional assortment of side dishes and spicy condiments. We also ordered some bulgogi because I definitely need more meat in my meals. All in all, it was quite a satisfying meal.

We hopped on another bus to get back to our hotel, and were able to view more of Bomun Lake Resort along the way. It’s know as Gyeongju’s tourist district, and is home to swankier hotels, such as the Gyeongju Hilton. The resort gets its name from the Bomunho Lake located at its center. It’s very picturesque, especially with all the cherry blossom trees lining the lake’s walkway. Also passed by some museums and the Shilla Millenium Park on the way down to downtown Gyeongju.

Honestly, I didn’t remember much of the ride as I kept drifting to sleep. Must’ve been the cool weather that kept lulling me off to dreamland whenever we’d be on long bus rides.